Unluckily for me, I was booked onto an early bus at 7.30am from Airlie Beach to Magnetic Island- there were a lot of empty seats from people who missed it because of the night before! After a five hour journey, I had to then get on a boat (not what you need hungover I can tell you) and then a public bus to the hostel. There is two main hostels on Magnetic island: Base and Lone Pine Koala Sanctuary. I stayed in Base hostel, because I was hoping (rightly) that I would already held a koala by that point, and it was a good choice- it just happened to be my favourite hostel in the whole of my Australia trip. It had a very beachy vibe, all wooden huts and bean bags etc and because there are no real clubs anywhere nearby, it has the BEST bar and nights out.

We got up early on our first day and looked to hiring a car- the ‘Barbie’ cars are famous to hire here, little pink cars. We didn’t manage to get a pink one because they had all run out but we hired a little red automatic between four of us, and then a snorkel, some fins and a stinger suit each and set off! The island was actually bigger than we were expecting and definitely more hilly, but our little car struggled along! We found a little shop where you could buy wallaby feed and then asked directions to where they were and found them. When we found some, they were gorgeous. We saw a mum with a tiny little joey in its pouch. After that, we found a patch of water to snorkel in and donned the attractive stinger suits etc but didn’t manage to see anything, because the waters were still quite murky from the cyclone. We stopped off for some fish and chips on the beach for dinner, and then drove our car back to be dropped off at the bottom of a hill (small mountain) for sunset. After what seemed like forever, we reached the top and it was worth it- we were so high up we could see for miles. We walked back and once we made it home we got ready for a night out- boozy bingo at our hostel. It was my favourite night of the whole trip. Boozy bingo was so much fun- they played a lot of music and drinking games in between reading out the numbers. After the bingo there was a massive disco and everyone was dancing on the tables all night. At this point, I knew most people in the hostel, having met them somewhere along the way up the coast which made it doubly fun. I could have easily spent so many more nights there!

From Magnetic Island to Cairns it was another long all-day journey (again with a terrible hangover- there seems to be a pattern here) and we got there pretty late at night. I went for one beer and then attempted an early night but I didn’t sleep due to some horrible people in my room. To be fair, I was staying at Gilligans which is the huge party hostel in Cairns- it is attached to a massive club.

The following day I had my first ever skydive!!!! We had an early start, got picked up at 7am and were driven to Mission Beach, a couple of hours away. Luckily by chance I was in a group with five friends I had made which took the edge off doing it by myself. We were one of the last groups of the day so had to wait around for ages, which only made us more nervous. Everyone was given a free meal token but nobody wanted to eat! We played cards to pass the time until our group got called at around 1.30pm. We filled in some safety forms and got introduced to the skydive professional we were paired up with, who strapped us up into the harness and packed us into a bus. They film every part with a GoPro and make you answer some cringey questions etc which is a nice idea afterwards when you buy the photos but very embarrassing at the time! As soon as we got into the bus I stopped being nervous and started enjoying it. As I was getting into the plane, my instructor stopped me and said me and him would get into the plane last so we were the first to jump out. Crazy!! The weather was incredible, we were told we couldn’t have had better conditions, it was so clear and sunny. Once up in the plane it was so so exciting as we climbed higher, knowing that we would level out at 14,000 feet in order to jump out the plane. Because I was first one out, my guy opened the shutter door and then the next minute, my body was dangling out as we got ready to jump out. Once you get over the initial 5 seconds of fear, the free-fall was absolutely incredible- you’re going fast but you’re still going slow enough to see everything around you and you fall through the clouds. After a while the parachute comes out and you float a lot more slowly to the ground and can see views of the land, beach and reef. We all landed safely on Mission Beach. It was such a good feeling, I was absolutely buzzing afterwards!! 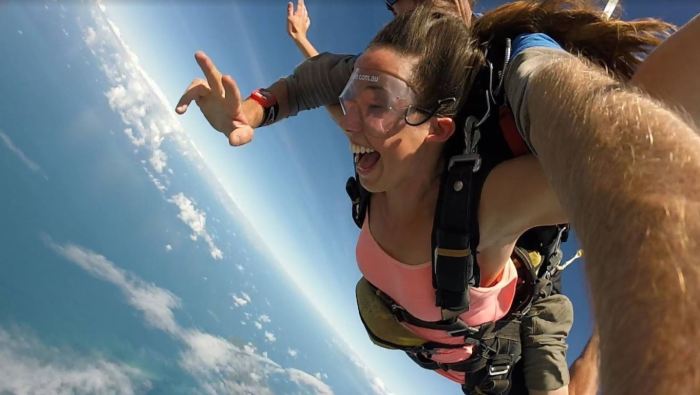 One of my other days in Cairns, I booked myself onto a Great Barrier Reef trip which included snorkelling and diving- because it would have been rude not to! I had by chance booked onto the same one as my friends which made it amazing. The journey out to the reef was about an hour and the water was so rocky- so many people suffered with sea-sickness. When we arrived we were split up into groups and took it in turns to do some snorkelling and diving. I have my diving qualification but haven’t dived for two years so went in the beginner group for a bit of a refresher session. I was a bit nervous to start with but forgot how cool it is, being able to breathe underwater! After a really yummy lunch, we stopped off in another dive site and did some more snorkelling and diving. It was a really good experience but I didn’t see that much- just lots of fish. Lots of the coral appears bleached or dead which is sad, I think a combination of climate change and tourism has ruined it. Maybe there are better bits that are more alive, I don’t know.

So this very long post rounds up my travels in Australia! After five days in Cairns, I had my flight to Bali booked the following evening. I had THE most amazing time in Oz, spending time in Perth with my family, loving Sydney and Melbourne, surfing in Byron Bay and then especially on this stretch between Noosa and Cairns. So many nights out, made so many friends, did some amazing things, saw incredible places, drunk a LOT of goon and loved every single minute. It definitely won’t be the last time I’m in this country! But I was looking forward so much to being back in Asia- and hopefully spending a little less money on everything! Onto the next chapter….