Borneo is somewhere I had wanted to visit for years, mainly because of my love for orangutans and my long-term dream of seeing them in their natural habitat. As I did some research, I realised I might also be able to see my other two favourite animals in Borneo too; elephants and turtles. So off I went to Borneo with high hopes to fulfil my jungle dreams!

Borneo is a large island in Southeast Asia shared by Malaysia, Indonesia and Brunei. As I did some research, I read that despite being the smaller share of the island, the Malaysian part of Borneo is the more well trodden path than the Indonesian so this is where I headed- to the state of Sabah, in the north. I flew from Bali to Kuala Lumpur and then straight on to Kota Kinabalu, the capital of the state of Sabah, landing late at night. I hadn’t had any internet for most of the previous week, so when I got up that first morning and did some proper research, I realised that Borneo was not only way bigger than I had anticipated- it is the third largest island in the world- but also I actually wasn’t anywhere near where I wanted to be! I wanted to be in Sepilok, in order to visit a well renowned Orangutan sanctuary there but unfortunately it was actually a six hour drive away from KK on a public bus. Instead of wasting the extra day travelling there, I decided to book an early flight to the nearest airport Sandakan for the following day. At this point I was still with my friend from home Jordan who had come with me to the Komodo Islands, so I booked for us both. All admin done, we then went exploring the city of Kota Kinabalu.

When thinking about Borneo, I thought only about the jungle and rainforest so I was kind of surprised by the size and craziness of the city of Kota Kinabalu; it was really busy, with big buildings and hectic roads. As the day went on though, we realised that although the city was busy, there weren’t many other tourists around at all. We definitely stood out and got so many stares! KK is a coastal city but the beach wasn’t within walking distance , so we spent the day exploring the streets, finding the odd food market where we bought some tropical fruit and I tried a spicy chicken laksa.  Surprisingly we also found a large, modern shopping mall with many western shops- which was something we wouldn’t have expected to see at all in this non-touristy city. Quite sad when you think about it! My Great Auntie actually lived in KK back in 1965 (called Jessleton back then) and I sent her photos- it would have been interesting to see how it was back then, untouched by the western world. Later that evening, my friend and I caught a public minibus to the main beach Tarjung Aru, to view the sunset. There were soooo many tourists taking photos but mostly Asian tourists; I had read that Borneo is popular amongst Singaporeans and Malaysians from the mainland. It was the most incredible pink sunset- which then turned into heavy rain shortly after, so we sheltered under a nearby shelter which fortunately turned out to be another really big/ cheap food market! This is one excellent thing about being in a non-touristy place- everything is sooo much cheaper!

The taxi came at 5am the following day to take us to the airport for our short flight from KK to Sandakan. On arrival, we got a taxi to Sepilok which took about half an hour. We were staying at Forest Edge Resort which fortunately was just down the road from Sepilok Orangutang Rehabiliation Centre, so we headed straight there. I have always loved Orangutans and wanted to see them looking happy and healthy, ideally in the wild but if not possible, then in as close to their natural habitat as possible, in a good sanctuary that treated them nicely. (In the wild your chances of spotting one are very slim- how it should be.) So I did lots of research on this- and the day was every bit as good I had hoped.

This centre is one of the oldest orangutan sanctuaries in Borneo, founded in 1964 and was founded with the aim of returning orphaned, injured or mistreated animals back into the wild. On arrival, we first went to a large showing of a video about the conservation programme there in the centre. It was really informative and had some gorgeous footage of orphans growing up in the sanctuary and later being released into the wild, becoming adults and having their own babies. The main timetabled activities of the day were the two feeding platforms- the morning one wasn’t due to start yet so we were redirected to the viewing gallery of the nursery to watch some little ones play. There were about six gorgeous young orphans playing around on their big playground of ropes and platforms. One tiny one still had a nappy on! They played non-stop as we watched through a window and were really mischievous, with one of them stealing a staff members hat and wearing it! 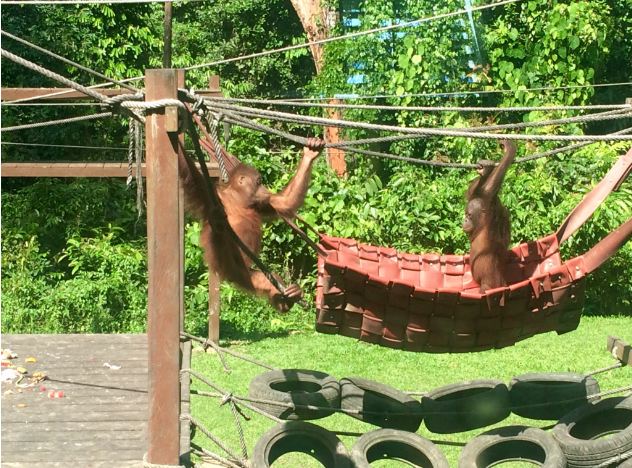 We managed to tear ourselves away and headed along the boardwalk to find a spot in the viewing gallery for the feeding platform. It was essentially a big wooden platform, tied to some trees where rangers put out bananas everyday. The reserve has no fences or barriers so orangutans that have been released into the wild after growing up in the nursery, can make daily visits back for some easy food pickings if they choose to. The rangers only put out bland fruit to encourage the orangutans to find their own more exciting food as they get used to fending for themselves in the wild. You’re not guaranteed a sighting on the feeding platform because they are wild and only a small minority come to feed there- so we had to keep looking up into the trees to try and spot a flash of orange. Luckily for us a few came out! One larger male orangutan came and sat lazily on the platform, ignoring the crowd and just making the most of the free food. A smaller more timid orangutan, clearly scared of the bigger one, kept sneaking over to grab some food and then run away again. I love how much personality they have!

We stopped for lunch and then paid a visit to the Sun Bear Sanctuary across the road. They were cute but very difficult to spot in their huge, leafy enclosure as they are quite small and black and were mostly asleep during the day. It was a not a bad problem to have though because it means that they have a large enclosure! There was one story where one orphan bear who wanted attention and self-harmed by scratching himself hard on branches which was really sad.  After walking round a few times, we headed back to the orangutan sanctuary in time for the afternoon feeding.

Luckily the sanctuary started to empty out by the afternoon because all the coach-loads of people left, so we got a better viewing point with less annoying people around us, inconsiderately taking photos with their flash on etc. This time, we were really lucky- first a group of five youngish looking Orangutans came down together. One laid down with a bored look on his face, it was funny. Then once they had left, we waited around a bit longer and a mum came down with a tiny, tiny baby, it couldn’t have been cuter! We think this is one of the orangutans released into the wild years ago- a happy rehabilitation story!

1 thought on “Orangutans in Beautiful Borneo”

Feeling ever so slightly small and insignificant in the Presidential Palace in Abu Dhabi. I have never seen so many jewelled mosaics/ chandeliers in my life!! Just incredibleee 💎💎💎
Morning light in the concrete jungle of downtown Dubai 🏙 (spot the worlds tallest building)
One year ago today - watching the sun set in Moon Valley 🌖🌗🌘🌑
Put your hands up if you miss travelling...! 🙋🏽‍♀️🌎 (and being tanned) 😩 .
One of my fave moments of 2019. Finally seeing Machu Picchu after years of seeing it in pictures! 🤩Four days of camping and hiking through the mountains and rainforest of the original Inca Trail, in rain, drizzle and with very low clouds, we didn’t have high expectations of the weather, but amazingly as we reached Machu Picchu just as the sun was rising on day 4 - the clouds lifted and we had incredible sunshine. 🌄Think it was the only clear day that week! 🙏🏼
Llamas joining us for a night of camping above the clouds in Peru 🦙🌄 (they get hunted in the wild by pumas - so slept near us for ‘protection’. Cheers guys 👍🏼)
This time last year! 🙈 I spent my last few days in Mexico on Isla Holbox - lying in hammocks, drinking coronas(with salt round the rim🤤) at wooden beach bars and watching sunsets.🌅 #ireallymisstravelling
Laguna Colorada 🇧🇴 watching flamingos feed on the red algae (which makes them and the water pink) 💕 #ireallymisstravelling
One year ago today I camped next to an active volcano in Guatemala.🌋 This volcano Fuego had erupted big time just the week before, and 4000 people had been evacuated from the nearby villages. One week on we were told this trek was ‘safe’ but if she started erupting too regularly or if the wind changed we would head straight down. When she started erupting every 20 minutes or so throughout the night, safe to say it wasn’t easy to sleep! I was convinced the guides had fallen asleep on watch and it was the end.😅 But we survived and it was the most surreal experience I’ve ever had.⛺️