I only spent three days in Singapore, right at the end of my trip last year before my flight home. From the Perhentians islands in Malaysia, it was quite a journey to get there – a twelve hour night bus all the way down to the south of the country, followed by another couple of buses. I decided to go a day earlier than planned because a friend was travelling down then for her flight and I didn’t want a repeat of my disastrous journey to the Perhentians! Luckily the night bus was pleasantly empty and I managed to stretch across two seats. When we got near Johor Batu at the bottom of Malaysia, it was getting light and we were told to get off the night bus and transfer onto a public bus to cross over the border. It was a short but involved journey, we all had to get off and get stamped out of Malaysia, and then get onto another bus which took us to the Singapore border where had to get off again to get stamped in. Then finally there was one more bus to take us to the main Singapore bus station, where my friend and I caught a taxi from to the hostel.

My first impression of Singapore, was that it didn’t feel like I was in Asia- it felt more like being in a clean version of London, or an Australian/ American city. It is a very small country right at the bottom of Malaysia but is mostly consists of the city and most people stay in the centre. Its a very clean place- there are laws against dropping litter and gum and the streets get cleaned every day. After freshening up, we went exploring.  Following a City map, I walked us to Raffles the famous luxury hotel but unfortunately it was closed for refurbishment- we walked around the outside and the amount of famous people that have stayed there in the 20th century. We then walked onto to the bay area- to see the fancy Marina Bay Sands building and the Gardens by the Bay. We were looking for somewhere to have some food and a beer but everywhere near the water’s edge was so expensive! So we headed ‘inland’ and found a cheap food court which was much more my scene. There was food from every country, and I bought a paneer curry from an Indian stall which was delicious. We then walked back to the Gardens by the Bay for the evening light show which is free and shown every evening I believe. We found somewhere to sit and it was very cool, the gardens themselves are impressive and the trees are lit up in time to very dramatic music.

I slept amazingly well (post night bus sleep) but we woke up the next day to rain which then continued all morning. It was cool and that exploring somewhere new, but I was definitely missing the beach/ island life and the sun! When it stopped, I walked along to Bugis Street which is where all the cheap shopping is. There was an absolutely HUGE market with hundreds of corridors and levels all selling different stuff.  I wondered around for hours and ended up buying a couple of tops and a playsuit for Glastonbury despite my lack of funds! That evening I walked towards the bay again and found a different food court overlooking the water, but still cheap. I bought some noodles and watched a fountain light show across the Bay from afar. Then because it was so good, I walked round to the other side of the Lake and watched it again. It was right under the Marina Bay Sands hotel and was honestly amazing, proper dramatic music and colourful lights shining patterns across moving water. Made all the better because it was free again.

The following day I got up early because more heavy rain was forecast to come around midday and I wanted to make the most of my last bit of sun. I was googling beaches but didn’t want to be stuck anywhere if there was a storm, so just went for a swimming pool close by.  When I got there, the pool was massive and I found a sun lounger easily and I had a lovely last full day working on my tan! The rain never even came! I headed back to my hostel that evening, with the hope of trying to find a tattoo place on a spontaneous last night whim, but noone would book me in on late notice. So I went out for dinner in Bugis Street and bought a few final souvenirs.

The next day, I woke up early to make the journey to the airport. I walked to the nearest MRT station, which is like the Singapore underground and was surprised at how easy it was to navigate. It was so easy and not crowded at all, which I expected during rush hour. Because I left myself so much time, I got to the airport ridiculously early, which was fine because Singapore airport is very fancy with lots to do! Overall I did like Singapore and can see why many people live and work there, because its a nice, clean city and in a great location in proximity to the rest of Asia. But when it was following a few days in beautiful tropical islands, they were always going to be hard to beat! I would definitely go back. 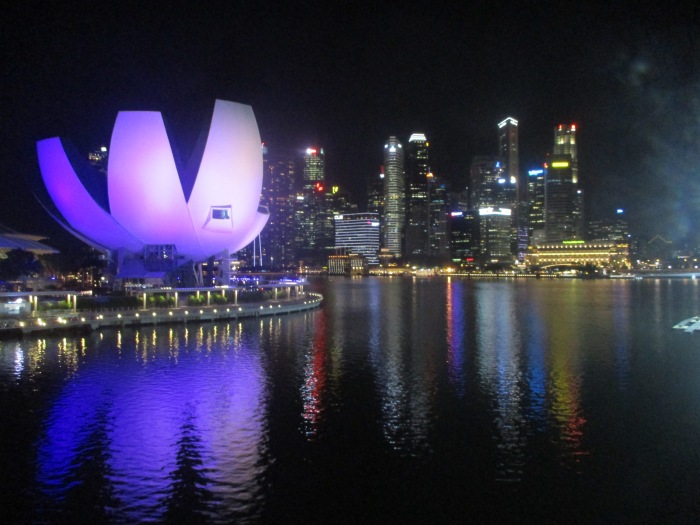