Last July I went on a cruise holiday to Norway with my family and I felt it deserved its own post, because the scenery was absolutely incredible. Norway has always been a country I wanted to visit because I had wanted to see the fjords; they always looked stunning in photos! Our cruise was a week long and started off in Southampton in the south of England, cruising up to the fjords in the south west of Norway to reach four places: Stavanger, Olden,  Flam and Bergen. Each was completely different, whether it had glaciers, turquoise lakes, waterfalls, green mountains or a sprawling city but all were stunning.

Our first stop was Stavanger. It was a pretty town, with lots of pretty colourful houses by the water but unfortunately the day we were there it was raining SO hard and was so cold! Our tour guide kept joking that it was a typical summer’s day in Norway. Our excursion for Stavanger was a rib ride, which is a high speed boat that you wear a full waterproof onesie on. It meant that we didn’t see much of the actual town, but we went out in the fjords and saw some amazing waterfalls. Unfortunately the rain didn’t let up and was just so freezing! Before getting back on the boat we looked around some tourist shops and first noticed Norway’s obsession with trolls- they are obsessed with them, there are so many folk stories about them.

Our next stop was Olden where again the weather was cold, but at least it didn’t rain! We did an excursion altogether as a family, the cousins plus parents which was really nice.

We got on a bus from Olden town which took us into the green mountains of Kjenndalen valley,  passing pretty lakes and spotting some green-roofed shepherds huts like the photo below. The roads were so narrow- every time we met a another vehicle, both had to stop and inch past each other, on quite a steep hillside. We drove round the outside of a pretty lake called Lovatnet lake, which I think is part of the Njordford area. The water was a really lovely turquoise colour. We continued on the bus, until a point where we were all told to get out and walk for about ten minutes,  until we came face to face with Kjenndalen Glacier, which apparently was an offshoot of Europe’s largest glacier, Jostedal. This is actually the first glacier I’ve ever seen! Afterwards, we got back on the bus and got driven to the lake to pick up the river cruise boat. It was lovely, the views were incredible as we surrounded by waterfalls and fjord mountains. On the way back we got taken to eat some Norwegian waffles with strawberry jam. Apparently strawberries (and probably most things) grow really well in Norway because of the amount of daylight hours they get there. They were so delicious! 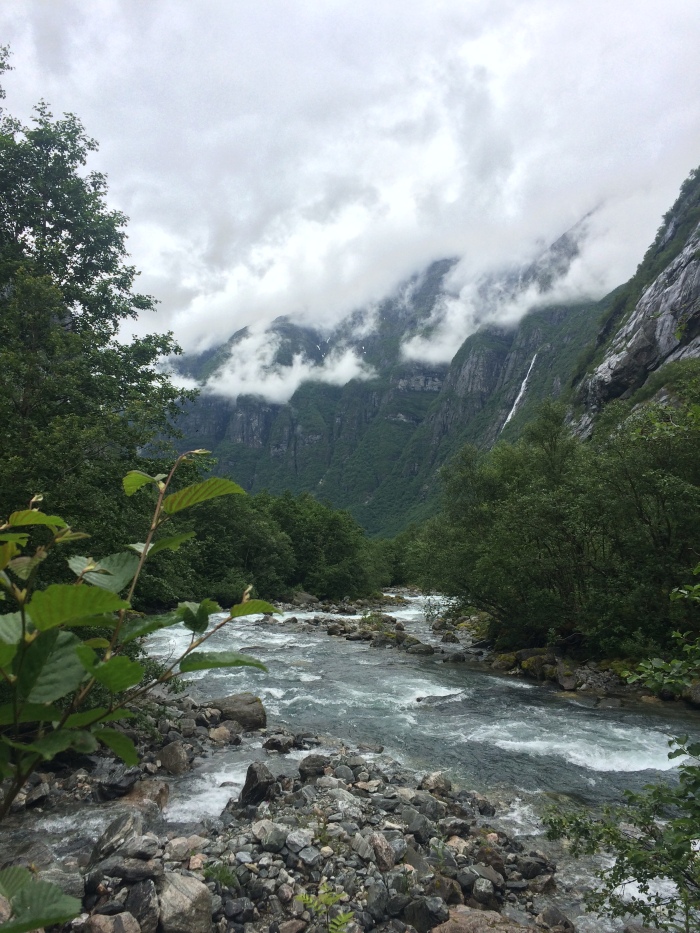 Our next stop on the cruise was Flam which was a gorgeous little village/ town at the end of a fjord. Our excursion for that day was unfortunately cancelled so we went on a walk, which turned out to be a million times better then we expected! We first around the small beach there which was so pretty, and then around the little market town, which was sweet but expensive. Then we started walking towards a waterfall in the distance, across some beautiful green countryside covered in some gorgeous, hairy, highland-looking cows. We were hoping to get as near to the waterfall as we could and were following a trail uphill and luckily passes some people on their way down who confirmed we were heading in the right direction. It was a pretty steep hill and we all struggled! We also came across the occasional sheep that we couldn’t decide was stuck up there or enjoyed it. When we reached the top, it was so worth our efforts, the view was absolutely incredible. There were rolling mountains as far as you could see, little villages. the fjord lake in front of us, the huge waterfall to our left- it was honestly beautiful. Flam is famous for being part of a train journey that has some of the best scenery in the world and we could see why!

Our fourth and final stop was the city of Bergen, which again was surrounded by beautiful mountains and fjords. Once docked, we walked along the harbour area where there were lots of pretty, coloured houses and took a funicular railway up the mountain to look at the view from up there. It was impressive, you could see for absolutely miles, and from so high up and far away, our huge cruise ship looked like an ant! We stayed up there for a while taking in the views and then afterwards, we walked around the harbour area and through an expensive fish market, to find a nearby ice bar. It was my first time in an ice bar and it was really cool! 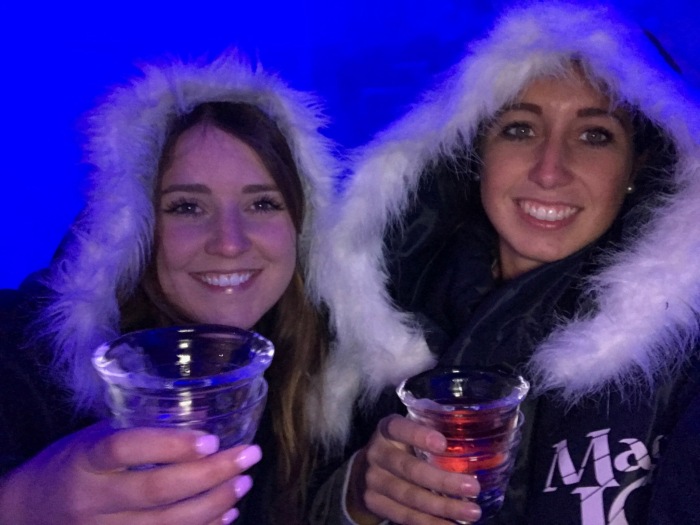 I absolutely loved our holiday in Norway and would 100% go back to the country though perhaps not on a cruise because it limits you, but was amazing for a taster of what is there!