So my first problems began at the airport! As I tried to check into my flight at Madrid, I was told that as a UK citizen I needed to have proof of onwards travel out of Panama- which was news to me! I was told if I didn’t have evidence to show border control at Panama, I would risk deportation. Haven’t even got there yet!! I sat on the floor next to the check in desk, did some super quick research and booked myself onto a bus to Costa Rica for ten days time. It wasn’t confirmed but I was hoping a preliminary booking would be enough to get me into the country!

The flight itself went surprisingly well- I flew with Iberia and it was one of the smoothest long hauls I’ve ever experienced. As soon as I landed, I logged onto the free WiFi and luckily the confirmation email had come through (thank god) so I could show customs. Which was a good job as it was pretty much an interrogation! Apparently they take passport control extremely seriously in Panama! 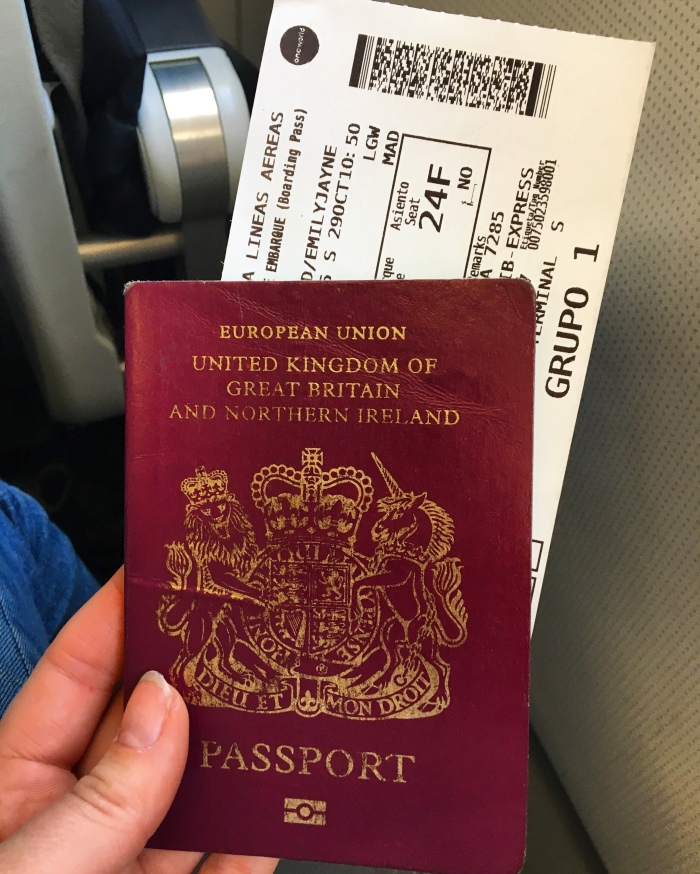 Once through customs, I encountered my next problem: getting an Uber to my hostel. I thought it would be pretty easy but actually I had a bit of a disaster. I booked a first Uber which arrived quickly. In order to exit the airport carpark, the driver had to buy a ticket from a machine, so he pulled over to one side. While I was waiting in his car, another car pulled out of a space straight into the side of the car I was in. Nothing drastic but there were dents on both cars. Naturally my driver wasn’t happy and started arguing with the other driver. After a while, I agreed with him that I should should cancel and get another cab while he sorts his damage.

I went back inside the airport to use the WiFi and booked another, which also came quickly. This driver, when getting his exit ticket, parked in a space- already an improvement! However when he started actually driving, I was following the route on my phone and he set off immediately driving in the wrong direction to my hostel. He kept driving further and further in the opposite direction, and into a really dodgy looking area. When I questioned it, he said he was using this route to avoid traffic (as we sat in traffic) and closed the Uber app on his phone. I was literally fearing the worst at point, and didn’t know whether to ask to get out, but had no idea how I’d be able to catch another taxi back- it was so dark! Finally, we headed onto a highway (which I think was his aim) and started heading back in the correct direction but we had driven approx 20km the wrong way so it took some time. I was charged over double the asking price!

When I finally got to the hostel it was such a relief!! I was staying at ‘Luna’s Castle’ in Casco Viejo which is the old historical part of town. I spent the remainder of the evening trying to stay awake to adjust to the time zone, and also the heat- it was soooo hot! But I was absolutely shattered so I just spent it lying in a hammock on the balcony overlooking the ‘new’ city with all the skyscrapers lit up and reflecting over the bay- it was a pretty incredible view. I was so excited to be here!!!

The next day my hostel was running a free walking tour to Ancón Hill, a viewpoint overlooking the city and the Panama Canal. After eating some delicious fresh pineapple for breakfast I joined the tour. I was lucky, I had such a lovely group and together with our tour guide Chris, we walked first through the backstreets of Casco Viejo/ Panama City and then took a long, slow walk up the hill, wildlife spotting in the trees on our way up. It’s amazing how much rainforest there is in the city! Chris pointed out some sloths high up in the tree but they were just indistinguishable dark patches. It was so hot and humid that everyone was sweating so much during the walk, but the views got better as we rose which inspired us to walk on. On the way up we got a fab view of the Panama Canal, the Miraflores Locks, and then from the top we had an even better view of the new City so it was definitely worth it.

On the walk back down, Chris pointed out first a toucan and then some monkeys swinging through the trees! The toucan in particular was really cool, it has a colourful rainbow beak and I found out it was a keel billed toucan, native only to Central America! On the way back to the hostel, we stopped by a famous fresh fish market, and bought some mixed seafood ceviche. It was okay- it has a very strong lime-y taste which got too much for me but I may learn to love it! Whilst eating our ceviche under cover, it started to rain and it absolutely chucked it down like it only can in a tropical country! It rained so hard and heavily onto a car parked in front of us that the car alarm kept going off! 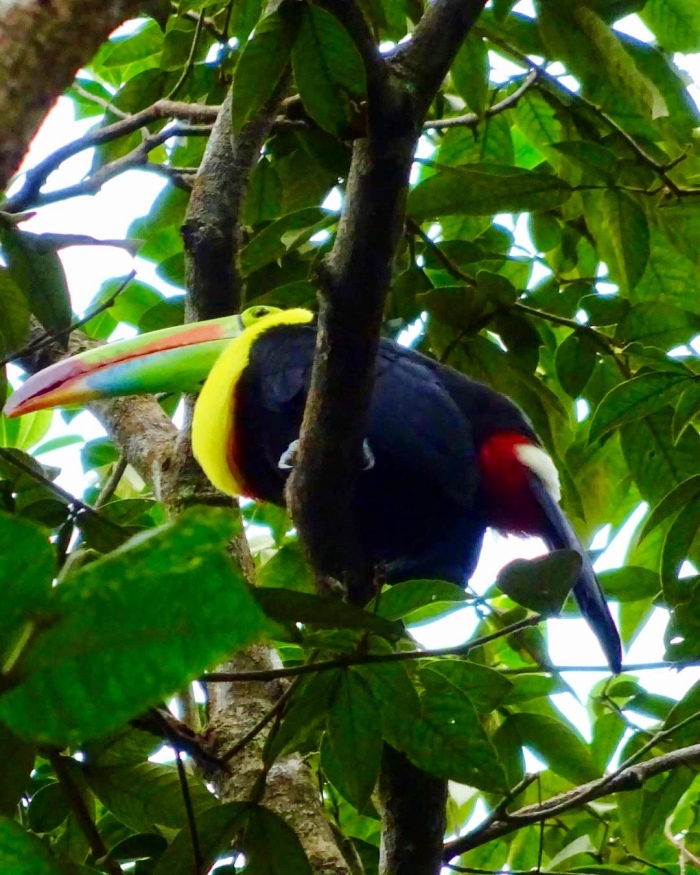 That evening there was another free walking tour; this time more of a historical tour around Casco Viejo, the old town. It was run by a Colombian lady who spoke extremely fast Spanglish so I can’t say I understood much of what she said, but I got the jist. Basically were mostly looking at beautiful colonial buildings and churches built about 400- 500 years ago by the Spanish. Then in later years many were destroyed either by pirate raids or in fear of them, but since then they have been restored to former glory. This area of the city feels very safe because the government put alot of effort into cracking down and clearing it up. That evening, a group of us went out for dinner, then to a lovely rooftop bar just round the corner and then later clubbing in Casco Viejo. Such a great first full day! 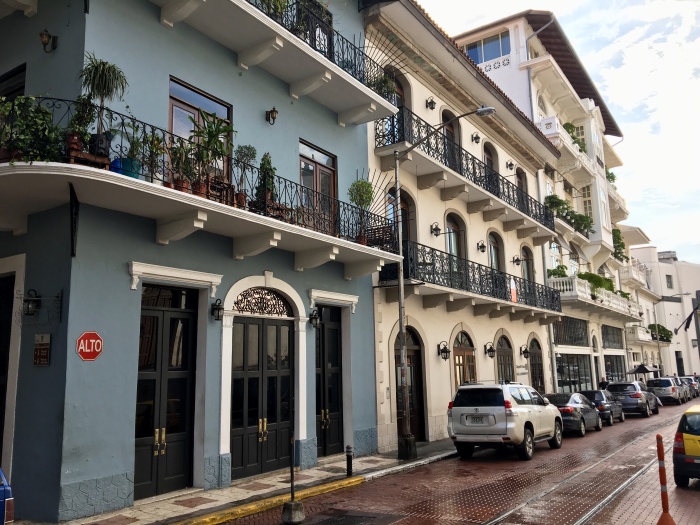 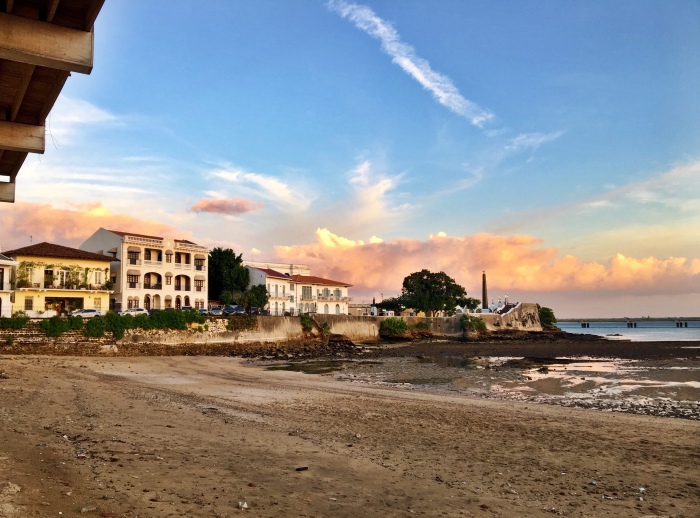 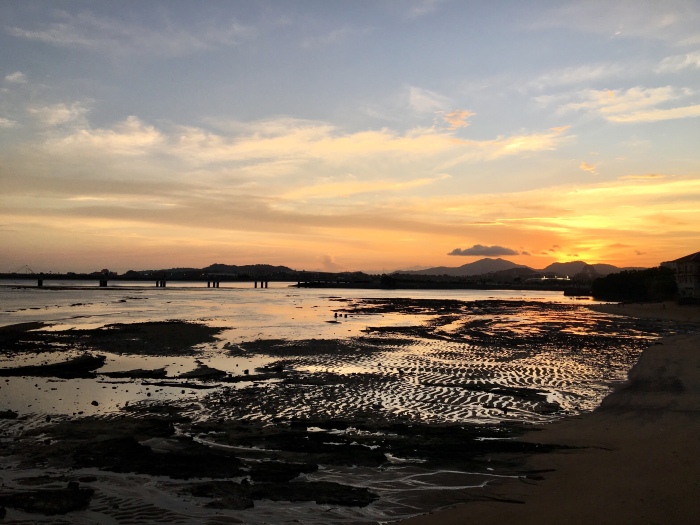 The following day, a few of us decided to visit the Panama Canal, to see it up close. We had heard lots of mixed reviews, with many people telling us it wasn’t worth it etc but we figured we can’t go all the way to Panama and not see the Panama Canal!! It’s such a famous point of reference! So we took an Uber there, paid our $20 entry and luckily arrived just in time to see the last boat of the morning pass through the Miraflores Locks. It was a huge red oil tanker, travelling from the Pacific Ocean to the Caribbean Sea. The Miraflores lock gates are a massive 25 metres high, they are the biggest out of the 3 sets of locks the ships pass through to travel through the Canal. They have to be this big to compensate for the amount the Pacific rises. In these locks the water rises and falls as much as 19 metres! You can see the difference, to begin with we couldn’t see much of the red oils tanker and then by the end of the locks, it had pretty much doubled in size!

Amazingly the canal is 80km long, connecting the two oceans and it takes ships around 8-10 hours to travel from one end of the canal to the other, passing through the locks. The French began its construction in the 1800s, but gave up and then it was finished by the Panamanians/ US and opened in 1913. It was then widened in 2016. As part of our entry ticket, we were able to watch a short film about how it was made and then visit a museum which was about both the Canal and Panama as a country. It was really interesting!

That evening we went for some drinks on a couple of the rooftop bars in Casco Viejo. They have so many to choose from and they’re all so pretty with fairy lights and overlooking the cityscape! Later we took a taxi into the new city to the Hard Rock Cafe. They had the ultimate rooftop bar which was 62 floors up and absolutely amazing. The view was just incredible- it was outside and open air but with glass all round the outside. It wasn’t even expensive for drinks considering the view! The DJ was unreal too, playing all the tunes! We absolutely loved it. 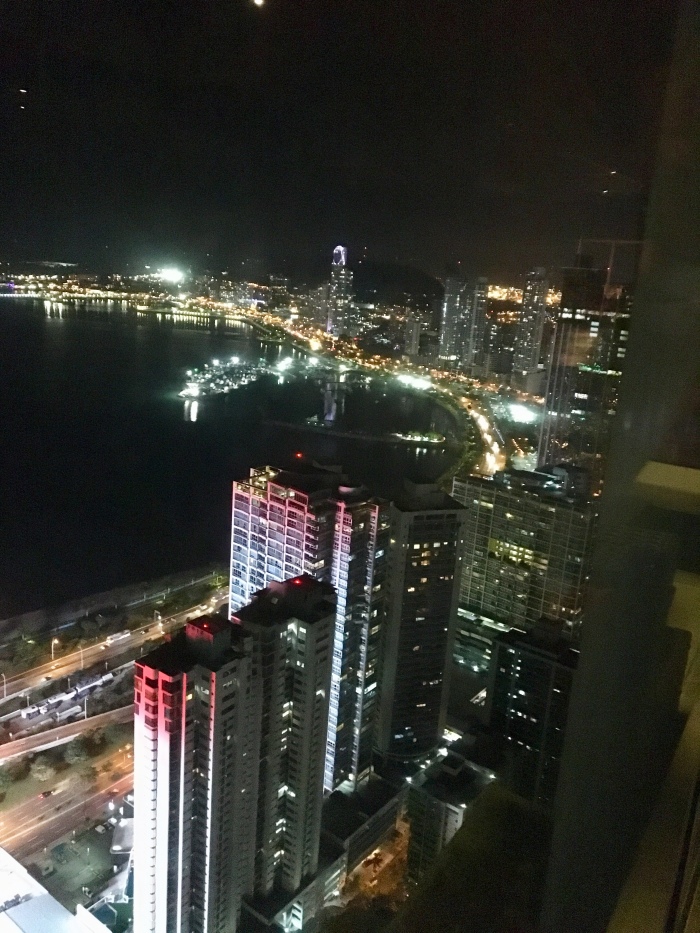 The following day, my new friend Helene and I decided to head out to some islands because the next three days were Panamanian public holidays and we were told travel would be pretty difficult in this time- especially to get out of Panama City. I was kind of sad to leave Panama City already because it had been such a good start to my trip (but equally didn’t fancy getting stuck there for the week as there’s so much else to see!) It has everything you need in a city; culture, history, good food, nightlife and to top it off a rainforest! It also felt safe the whole time, perhaps because we spent our time in Casco Viejo which is the safe area.

But onwards to the next place!

One thought on “Day One in Latin America! | Casco Viejo, Panama City”