A few hours after returning from the San Blas islands, I left to catch a night bus to Bocas Del Toro, my next destination. Annoyingly the direct bus there was fully booked, because it was the Panamanian national holiday weekend. So as a (longer) alternative, I booked a night bus to David and then caught a connecting bus north to Almirante (the boat port) in the morning. From there, the boat took half hour to Bocas Town on Isla Colon, where I then had to transfer over to another jetty, in order to get a taxi boat across to the opposite island, to reach the hostel I had booked. Such a mammoth journey!!

Because it had been the national holiday of ‘Day of the Dead’ that Friday, the weekly bar crawl Bocas is renowned for had moved to the Saturday night, because no alcohol is allowed on Day is the Dead. I arrived the on the Sunday and it was carnage – so many floorboards had been broken/ were being repaired! I really wasnt feeling up to exploring properly that day because I was so tired, but I had a little walk around the island called Isla Canero and then a snooze in a hammock! I made some friends and for dinner, we walked to a nearby restaurant where you could see huge stingrays swimming around in the water underneath! We ended up spending a few hours there, because it absolutely poured with rain. I’d been so lucky with the weather, it’s been easy to forget it’s rainy season!

One place I really wanted to visit while in Bocas, was ‘Starfish Beach’, or Playa de las Estrellas on Isla Colon. I caught a taxi boat over to Bocas Town ($1 a journey), and then walked to the main park to catch a colectivo (essentially a minibus) to Bocas Del Drago, the nearest town. It was a twenty minute drive and only cost $2.50 – quite the bargain! From there, it was about a twenty minute walk to Starfish Beach, along a gorgeous jungle path along the coast. The beach itself was very long and narrow, and it was full of Panamanian families enjoying their national holidays- I think normally it would be much quieter this time of year. It was really beautiful; the contrast of colours were unbelievable! There was golden sand, turquoise waters, fringed with bright green jungle. At first the starfish weren’t very visible, perhaps because the tide was in, but as it went out, more and more became visible in the shallow water which was amazing! 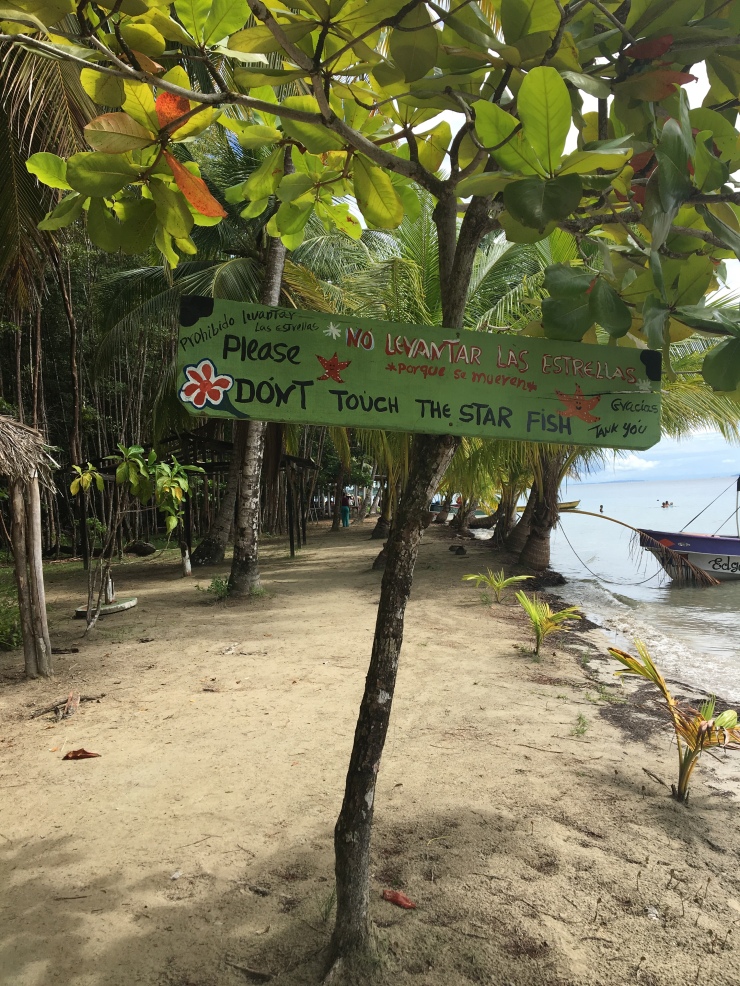 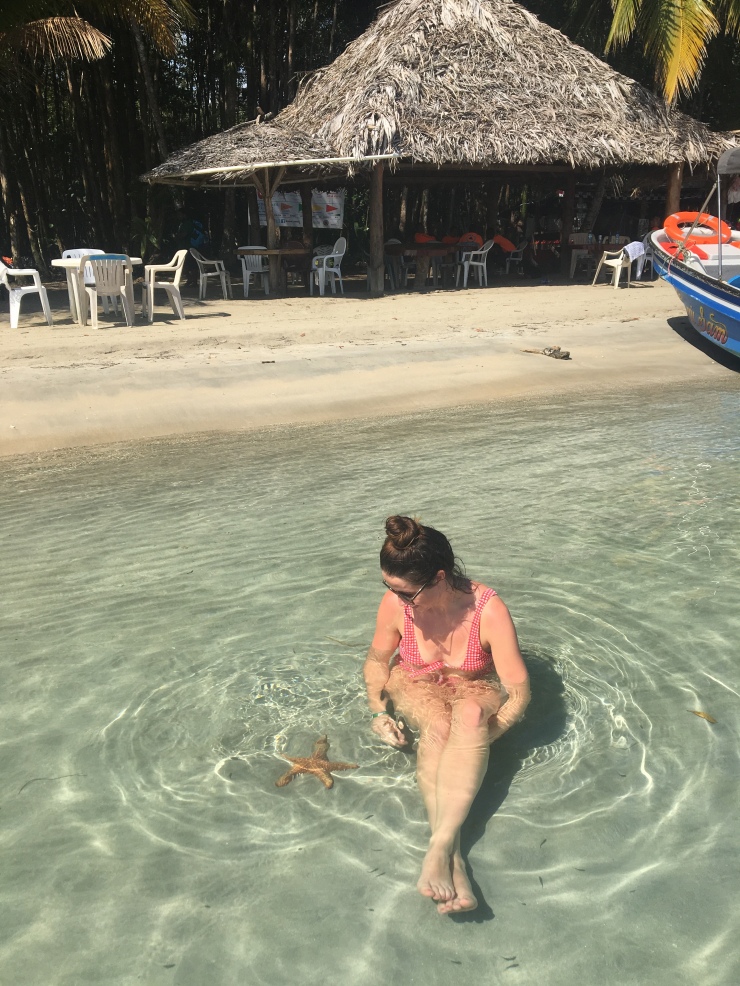 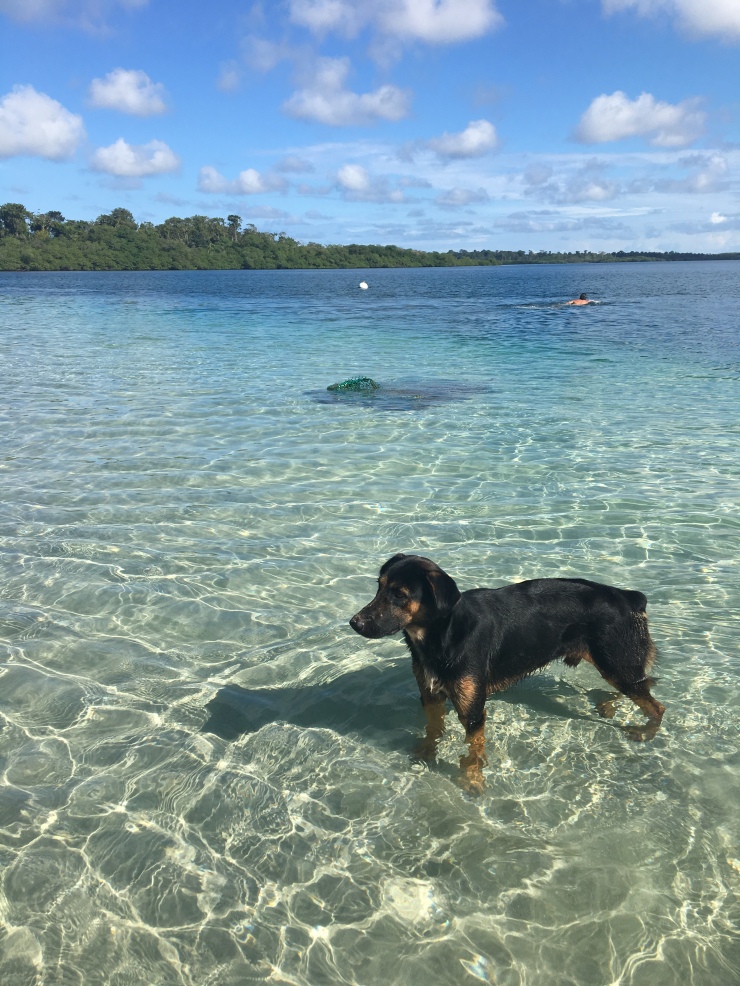 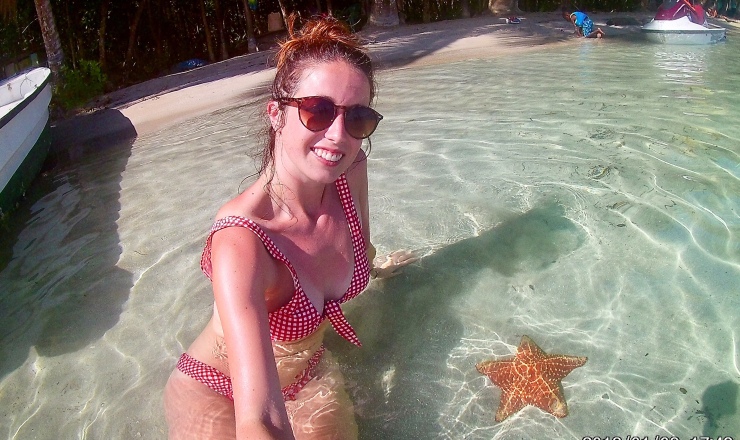 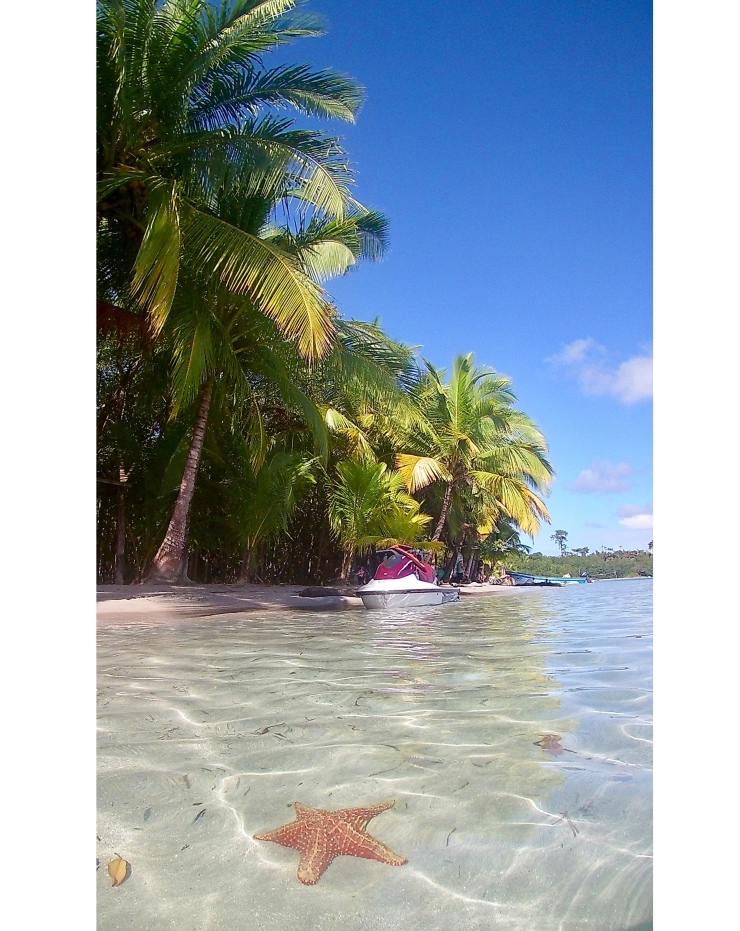 After a few hours, we headed back to catch the return collectivo because it was so hot and we could feel the burn! The walk back to Bocas Del Drago was even more beautiful on the way back, because with the tide out and you could walk along the waters edge. Honestly photos don’t do it justice! When I arrived back in Bocas, I explored the actual town area a little. It is small and has a lovely Caribbean feel with all of the buildings painted such pretty colours. It is such a pretty town, I absolutely loved it. 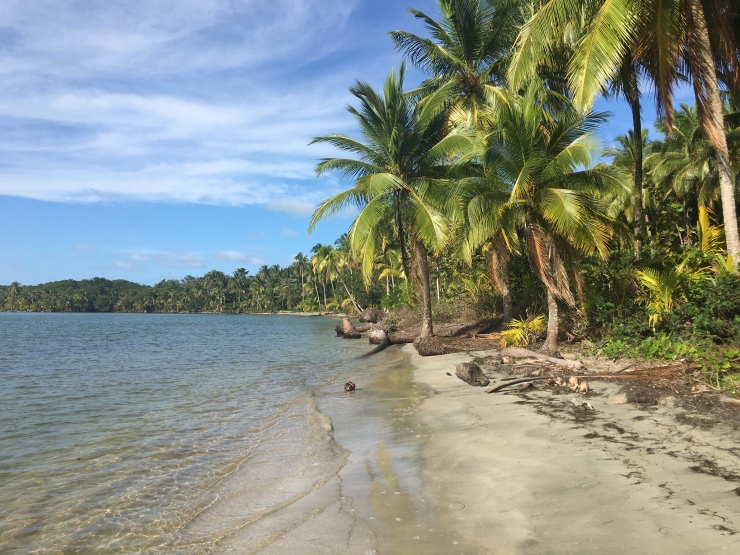 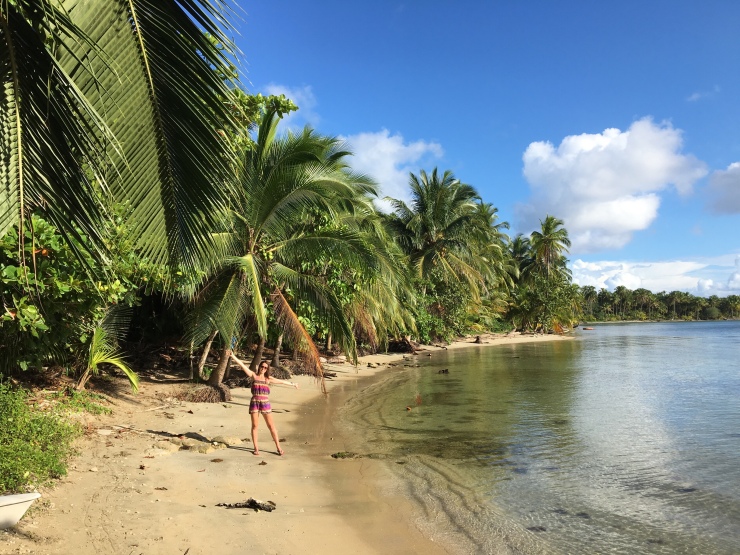 The following day I checked out and caught a boat taxi to another island, Isla Bastamientos because I wanted to visit Red Frog Beach- I had heard amazing things! I dropped my bag off and walked down to the beach, which was huge, and again really beautiful. The only downside was that the waves were pretty big so it was difficult to swim! I met up with friends and we went for a long walk along the island coastline to see all the other beaches. They were all beautiful and we didn’t see another soul!

Later that evening, we headed down to Palmar Lodge on the beach for dinner and happy hour. There was a fire dancer and then salsa lessons- I love how many hostels put these on! I went to bed at 3am, and had stupidly agreed to get up for sunrise at 6am, so three hours later I had to get myself up again. To be fair the sunrise was definitely worth it, it was very colourful! 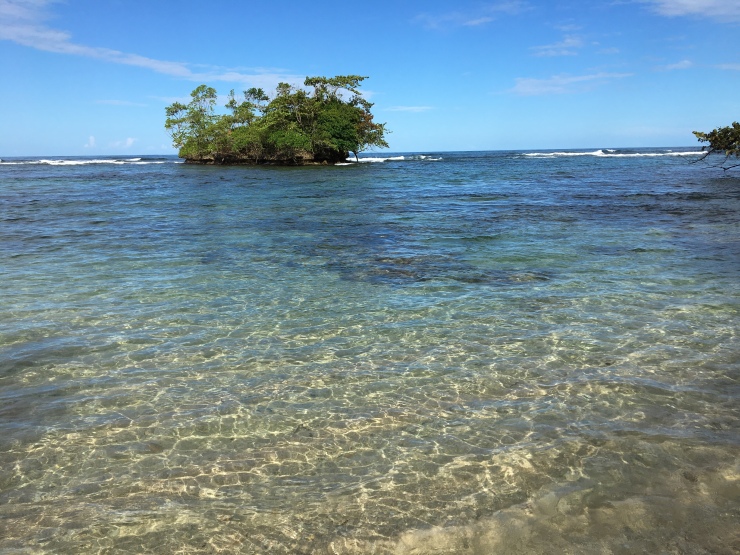 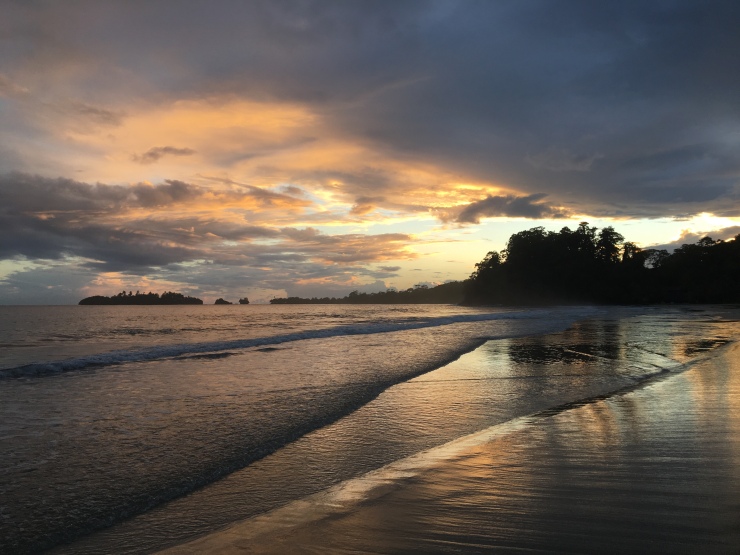 The next day I headed back to Bocas Town, and to La Buga, a dive school I had been emailing. It cost $85 for two dives, which seemed to be about average price. The school was really professional and my divemaster was a Rasta guy called Kaly, who was very cool. We kitted up and joined a huge dive boat with several other groups of divers. The boat had loud speakers and played music, which was cool- I have never had that on a dive boat before!

The first dive was pretty average- it was just over reef which didn’t really look that healthy. It wasn’t very colourful, and almost looked bleached. We saw lots of small fish but nothing unusual- the only real point of interest was that were hundreds of lobsters. However the second dive made up for it a million times over- it was a wreck dive and was so amazing! We swum up to a shipwreck, before going underneath it and then through it. It was absolutely unreal. Quite a surreal feeling swimming underneath, because I didn’t want to get trapped- but had to just chill out and I was fine. After the dives we were given a beer and some pineapple which was a nice touch- would 100% recommend the school! Stayed for a few beers afterward while filling in my log book. Such an amazing experience! 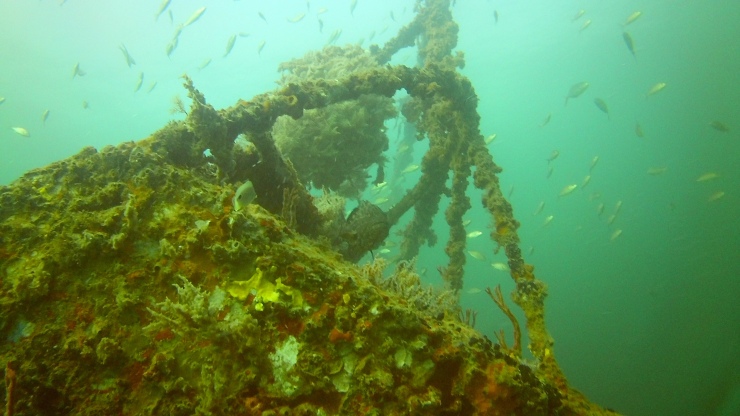 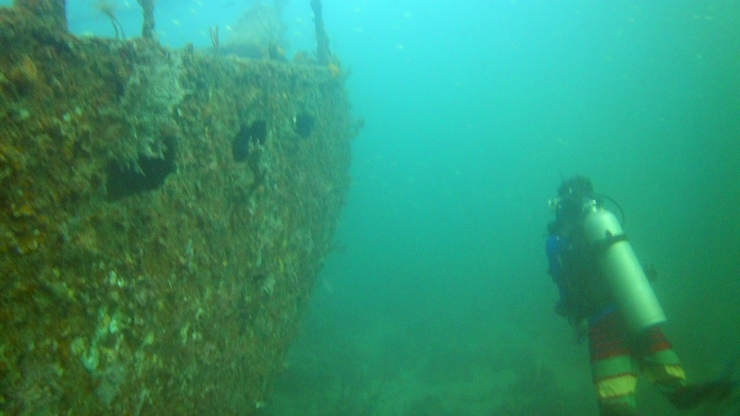 The following day, my boat and bus shuttle was due to leave at 12ish for Costa Rica. Amazingly from the boat we saw some dolphins on the way back! I definitely could have spent so much longer in Bocas, it was really beautiful. There were a couple of tours I would have liked to do, and I didn’t get to each island but I really loved what I did get the chance to see and do. My favourite place so far for sure!

One of my fave moments of 2019. Finally seeing Machu Picchu after years of seeing it in pictures! 🤩Four days of camping and hiking through the mountains and rainforest of the original Inca Trail, in rain, drizzle and with very low clouds, we didn’t have high expectations of the weather, but amazingly as we reached Machu Picchu just as the sun was rising on day 4 - the clouds lifted and we had incredible sunshine. 🌄Think it was the only clear day that week! 🙏🏼
Llamas joining us for a night of camping above the clouds in Peru 🦙🌄 (they get hunted in the wild by pumas - so slept near us for ‘protection’. Cheers guys 👍🏼)
This time last year! 🙈 I spent my last few days in Mexico on Isla Holbox - lying in hammocks, drinking coronas(with salt round the rim🤤) at wooden beach bars and watching sunsets.🌅 #ireallymisstravelling
Laguna Colorada 🇧🇴 watching flamingos feed on the red algae (which makes them and the water pink) 💕 #ireallymisstravelling
One year ago today I camped next to an active volcano in Guatemala.🌋 This volcano Fuego had erupted big time just the week before, and 4000 people had been evacuated from the nearby villages. One week on we were told this trek was ‘safe’ but if she started erupting too regularly or if the wind changed we would head straight down. When she started erupting every 20 minutes or so throughout the night, safe to say it wasn’t easy to sleep! I was convinced the guides had fallen asleep on watch and it was the end.😅 But we survived and it was the most surreal experience I’ve ever had.⛺️
Right, back into this insta!‼️ . Just finishing up a blog post that I started writing months ago, much earlier this year, about Rainbow Mountain in Peru... and jeeeeez I had forgotten how incredible the scenery was! Blog post (and more pics) to follow soon 😍🌈🏔
Dubrovnik walked city, from above 🏰
Imagine that wall of lava coming towards you! 🌋 This is what remains of a ski village completely buried by lava when Mt Etna erupted in 2002. The village originally consisted of two hotels, two restaurants, ski hire stores, souvenir shops and a ski school. Luckily the people were evacuated but the village was completely swallowed up by the lava flow which was an amazing 400 yards wide and 20 feet high.😱🤯
It’s been a year this week since I quit my job to travel Latin America solo. Its the third job I’ve quit to travel, sadly always leaving friends behind. I’d travelled previously, both solo/ with friends- but this was the hardest leap so far. I remember being at the airport a year ago feeling sick with fear. 🥺 It was the best decision I ever made. This trip was my biggest challenge, and biggest achievement. Never before have I learnt more about the world and myself; felt more empowered; felt more proud of myself or more free. 🌎 However it’s also been the hardest to return from. Those amazing feelings are a distant dream. ☹️ I’ve spent the last 5/6 years of my life always saving up to go travelling. It’s hard having to readjust my mindset/ sense of purpose/ knowing who I am. I miss it everyday.💔