Before I arrived in Antigua, I had been conversing with the owner of the Spanish school as to which accommodation package I would be choosing. I went with the cheapest option, one that was $85 for the week, for a room in a homestay with a shared bathroom. On arrival in Antigua, I headed straight for the school office, to be told that someone from my host family would be along to pick me up from there. Shortly after, a lady came and we walked the ten minutes back to her house. I stupidly hadn’t completely registered what living with a homestay would entail, but it was basically a room in a Guatemalan home, with a family who spoke absolutely zero English and I had to eat all my meals with them! Even on that first walk to their house, my host spoke to me in Spanish the whole way and I really struggled to answer her! The last time I had actually studied Spanish over ten years ago in School, so I couldn’t remember much at all. I tried to practice on Duolingo before coming away, and had picked up a small amount on my trip so far but not enough to be conversational!

On arrival at the house, I was shown to my room and introduced to the family. They seemed really nice but the whole thing was very overwhelming, not being able to understand what anyone was saying. I left the house and spent the rest of the afternoon and evening out exploring the city, questioning what I’d signed myself up to! It already definitely felt like one of the most challenging things I’ve done! Lucky there was lots to distract me- that first weekend in Antigua there was a huge ‘Festival De Las Flores’, where the whole city was decorated with beautiful flowers. Antigua is a beautiful, charming city with lots of old Spanish colonial architecture, and colourful buildings and ruins, so is already a big attraction in itself, for Guatemalans and tourists around the world. At weekends, it is twice as busy and I spent the evening walking around, soaking in the atmosphere before going back to the house for my first dinner with the family. During the meal, the grandmother Marie Elena asked me lots of basic questions in Spanish, like do I have brothers or sisters, who do I live with, what do I work as etc, and I managed to answer everything in very basic words. I only hoped they must be used to it, having people like me not being able to speak much Spanish yet- I hoped they weren’t finding it rude when I couldn’t answer!

Things didn’t improve much for me over the next few days. I found living with the family tough, as I was on my own in the house at that stage-  and I was finding speaking with them very hard and I felt quite lonely. They were really nice, but there was just the language barrier. I was looking forward to starting school on the Monday, thinking I could make friends my own age there but then it turned out the lessons were 1 to 1 with a teacher so the opportunity for socialising was minimal. To make matters worse, an extremely active volcano close by called Fuego, let off a huge eruption on the Monday morning and I could only find out information in Spanish. It was pretty scary! You could see the eruption from the family’s front door! Four thousand people living in towns directly underneath the volcano were evacuated, but noone from Antigua, which is nine miles away, but it was still close enough for comfort. I later found out that Fuego had a huge eruption in June this year, which killed had hundreds of people and still hundreds were ‘missing’. I think this number could be bigger still because there was no record of how many people actually lived there – so sad. Insane to think no one was warned quickly enough to try and make an escape, in this day and age.

Luckily that Monday evening  I was joined by an English housemate who also lived in the same house, called Will, who had just been away for the weekend because he was a long term student. My Guatemalan family had probably told me that he would be there too but obviously I hadn’t understood! It was really nice to have a housemate and by mid week we were really starting to get on, and things massively improved for me. It also helped that his Spanish was excellent, which made conversations over meal times significantly less awkward! It took a couple of days but I started to really enjoy my routine of breakfast, school, back to the house for lunch, and then the afternoon exploring the city either on my own or with Will, or taking part in the school activities.

The mealtimes at the house were delicious- they were all cooked by the grandmother Marie Elena, and mostly consisted of traditional Guatemalan food. Most dishes included some form of black beans (normally as a dipping sauce), rice and corn tortillas (to dip in the beans. One of the nights we had blue corn tortillas, which are obviously a blue colour which was cool! I tried a “Tamales Colorados”, which has a unique tomato and achiote based paste called “recado” and is filled with meat inside with cheese on top which was nice. We also had different meats, sauces that I’m not sure of the names of, guacamole and plantain which was delicious. When she realised I like spice, I was always given a bottle of bright green chilli sauce to smother my food in. For breakfast we were given, fruit, bread and eggs most days which were really nice. 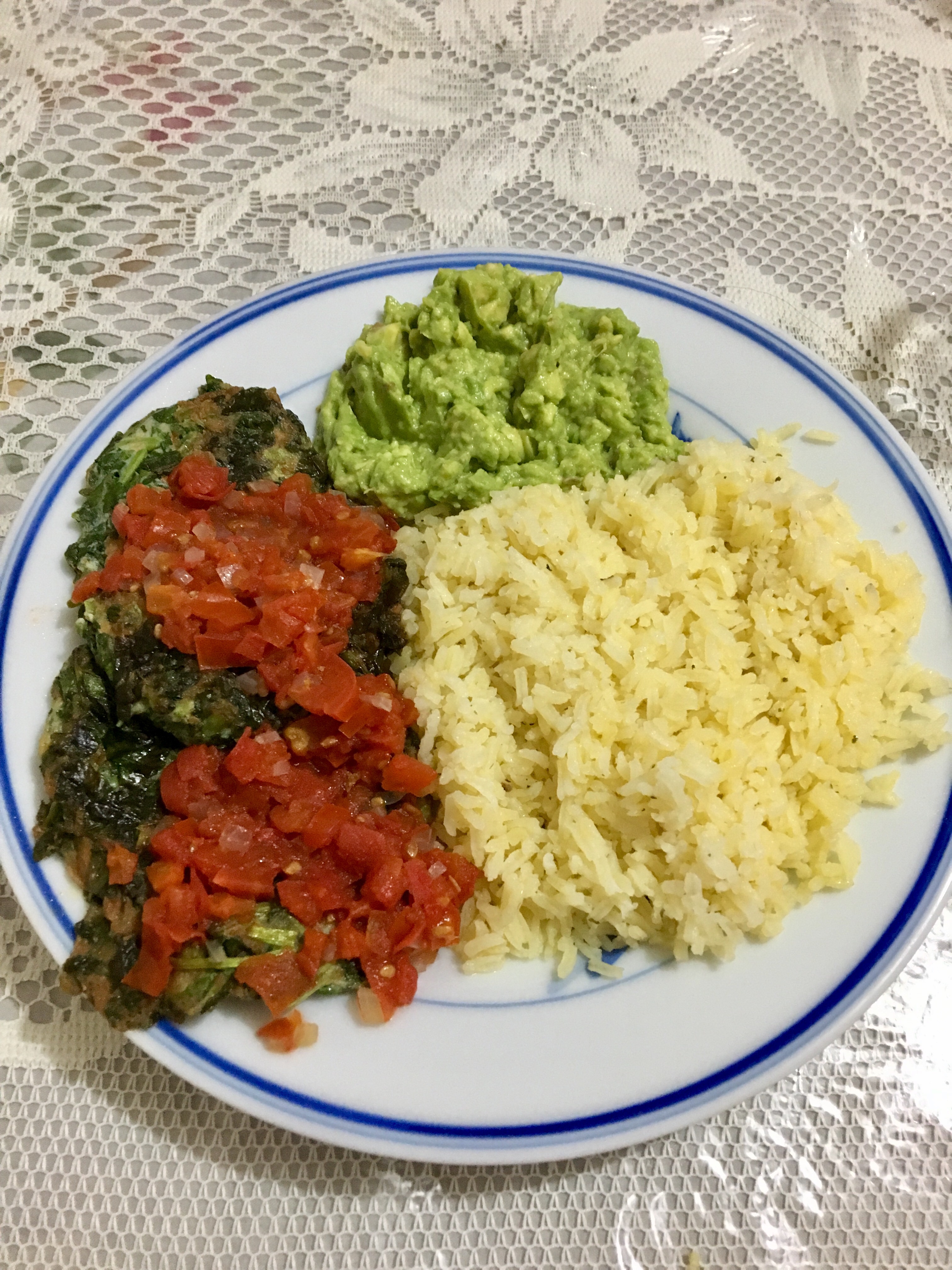 On two occasions I took part in a salsa class in the evening before dinner, which was so much fun- I had never felt so cultured! And then twice we went drinks with other students, found some cheap bars and went to some nightclubs. Antigua as a city was really lovely to walk around, and apparently safe so it was nice to spend some actual time there. It is surrounded by volcanoes, so the views are pretty amazing down every street. Since it became a UNESCO protected city, apparently all of the buildings have to be regulated that none of them get over a certain height, and they all have to be painted a certain selection of colours. It seems strict but its worth it, its a really beautiful place. 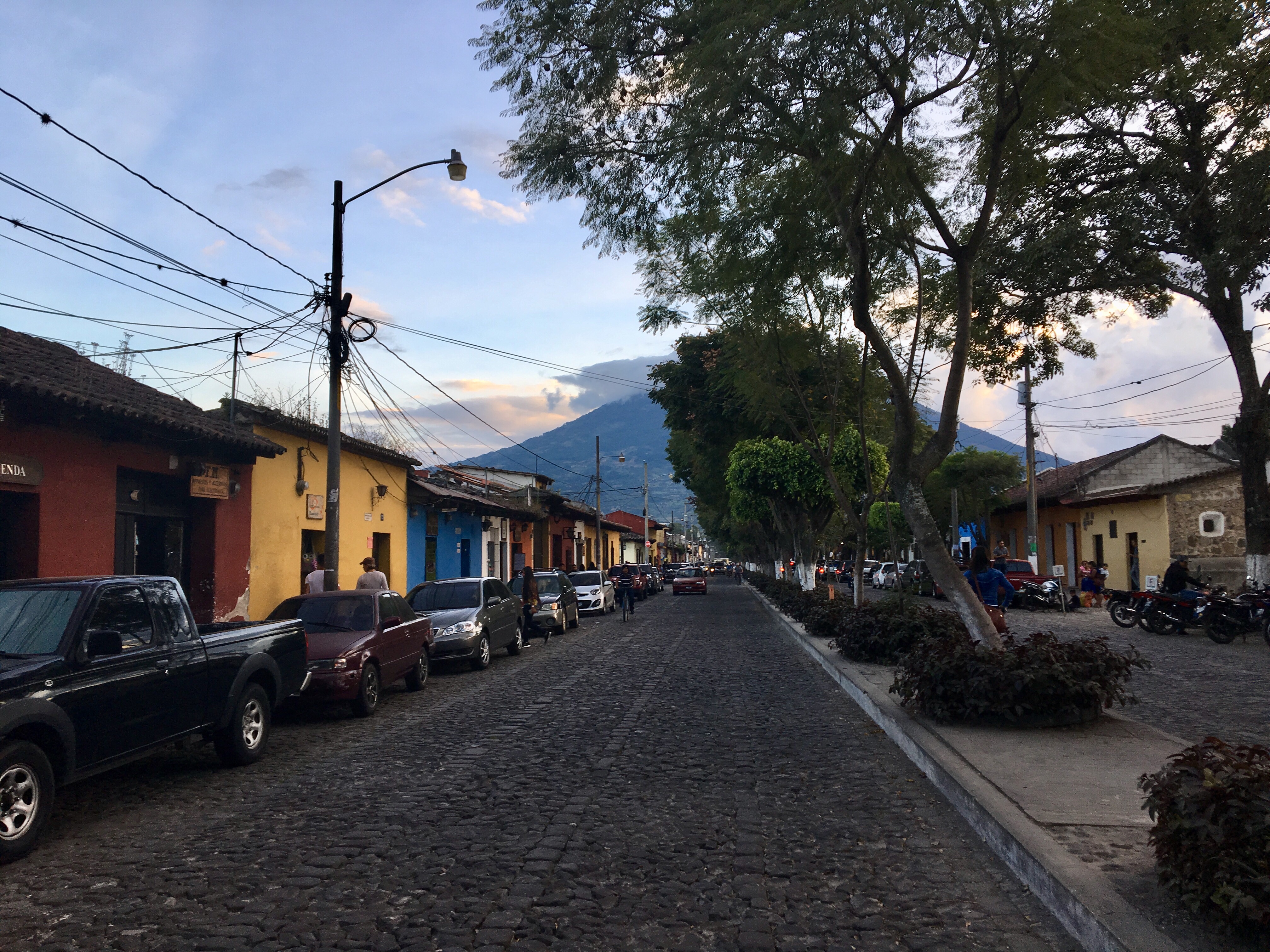 Even though, as you can tell from my moans that I did really struggle at the beginning of my week with the family and the language barrier between us, but I think I was unlucky that Fuego decided to do its big eruption early that week because that really freaked me out- especially because Antigua is so earthquake prone! However I had to take a step back and recognise that I was only there short term and that these Guatemalan people live here all the time and they’re not afraid! I did feel very sorry for those being evacuated, as I think that sometimes, those who live directly underneath a volcano like that, probably do so because they might struggle to afford to live anywhere else. Especially so soon after the June tragedy. After a few days, living with the  family and being surrounded by Spanish, I was definitely able to understand more, which made my relationship with the family slightly better, as I was able to understand the jist of what they were saying. It was an amazing experience and I don’t regret doing it at all but I wouldn’t perhaps do it again without some Spanish practise first – I just felt awkward when I wasn’t able to answer the questions as it felt rude. I felt very out of my comfort zone! But then they said the best way to learn is the throw yourself in the deep end…